I had three cross stitch cushions to complete this year for gifts and this final one has taken by far the longest to complete. It was a much bigger pattern than the previous two and had much more detail and I didn’t think it was going to end! But, I have finally managed to get through the mountain of crosses and what seemed to be never-ending backstitching. I was a bit worried that once I had finished all of the crosses, the pattern wasn’t going to stand out very well but the backstitching in the pattern did its job and pulled it all together brilliantly. The pattern is from 365 Cross Stitch Designs (Volume 2)

Once completed, I created the pillow. I didn’t fabric ‘frame’ the front of the cushion like the previous two as I think the picture itself was enough detail for the front and I didn’t want it to be overshadowed by any fabric colours. I again did a back flap cushion so there I wouldn’t need to fit a zip. I found a red flowery fabric in my stash and used it for the back, which I think complements the colours in the cross stitch really well.

I cut two pieces for fabric for the back (one for each flap) and made sure I cut them big enough so that I could fold the fabric in half to create each flap. This meant I didn’t have to hem each of them and it also gives the back a bit more strength rather than just having a single thickness of fabric. I then laid them right sides together with the cross-stitch picture, ensuring there was an overlap on the two back flap pieces. Once I had sewn them together I turned it the right way and then pinned a line about 1 inch from the edge the whole way around the cushion. I then sewed along this line the whole way around the cushion. I choose a light blue shade of thread to do this so that it would stand out slightly and it also matched the blue that was used in the circle border of the cross-stitch pattern. This line gives a bit of a border to the cushion without using fabric and I think it finishes the edges off nicely, rather than just having the cushion going straight to the edge. 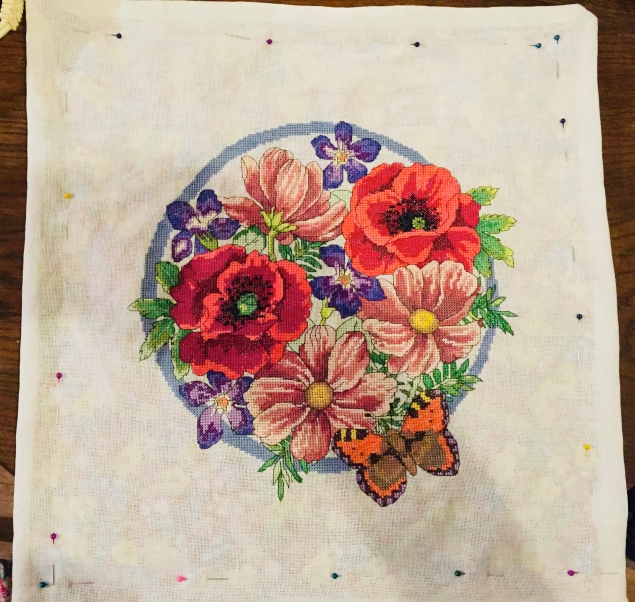 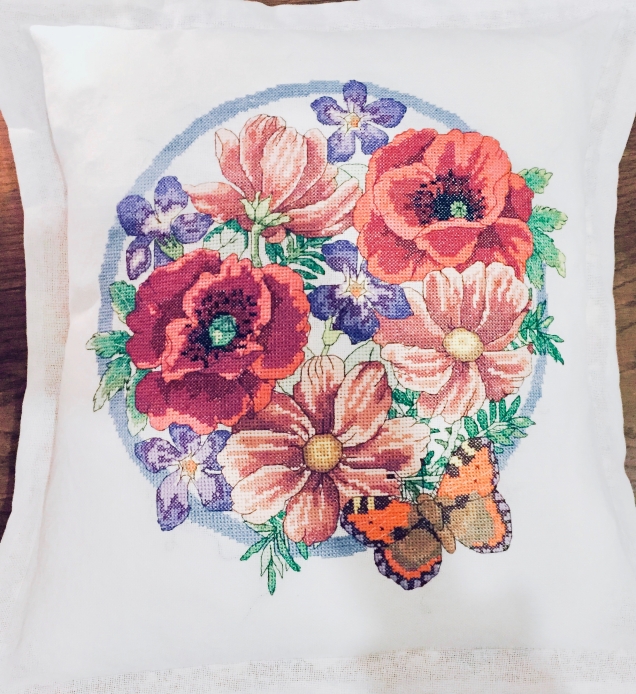 This cushion turned out even better than I had hoped and I’m really pleased with it. It’s a shame I cant keep it for myself!

One thought on “I saved the biggest until last. A cross stitch flowery flurry is ready just in time”

For exclusive content including free patterns and behind the scenes, check out my Patreon page: www.Patreon.com/hookstitchsew